In the aftermath of a disaster, chaos and confusion reign. The familiar landscapes and routines of daily life are often altered beyond recognition, leaving victims with no idea what to do next or where to turn for help. This is the world that disaster relief teams and early responders are trained to inhabit. This is the world of Team Rubicon.


With a mission that is both simple and always changing – to provide assistance and comfort to people on their worst days – the battle-hardened military veterans of Team Rubicon are uniquely prepared to adapt to the most dangerous and difficult circumstances imaginable. Their skills and discipline, honed in war zones and specialized deployments, have proven to be singularly valuable in times of crisis.

When these men and women arrive on the scene, a sense of order and optimism arrives with them.

Boots on the ground

Team Rubicon was founded in 2010 in the wake of a catastrophic earthquake in Haiti that killed hundreds of thousands of people and rendered almost a million more homeless. Moved by the scenes of devastation on the nightly news, two former Marine Corps sergeants were determined to take action. When their offers of assistance were turned down by traditional relief organizations, the two friends took matters into their own hands.

They assembled a team of six other veterans and first responders, collected donations and medical supplies, and flew to the Dominican Republic. From there, they drove a rented truck loaded with their supplies into the disaster zone in Haiti. The scene they encountered was strikingly similar to situations they’d faced during their tours in Iraq and Afghanistan. Armed with much-needed skills and expertise, they hit the ground running – and never looked back.

From anguish to action

The experience in Haiti convinced this small group of first responders that they were on to something. Word about their fledgling organization spread, and they were joined by increasing numbers of veteran volunteers on international missions – to Chile to help after another massive earthquake and to Pakistan to rebuild after hugely destructive floods.

Then, in 2011, tragedy struck close to home. One of Team Rubicon’s original eight members succumbed to PTSD and committed suicide. The team was devastated, but in typical fashion, they turned their anguish into action. Realizing that they needed to do even more for struggling military veterans, Team Rubicon decided to intensify efforts to engage more returned service members in more missions more often. That meant focusing on deploying expanding numbers of volunteers closer to home, ramping up their logistics and capacity to increase their involvement in domestic disaster relief. 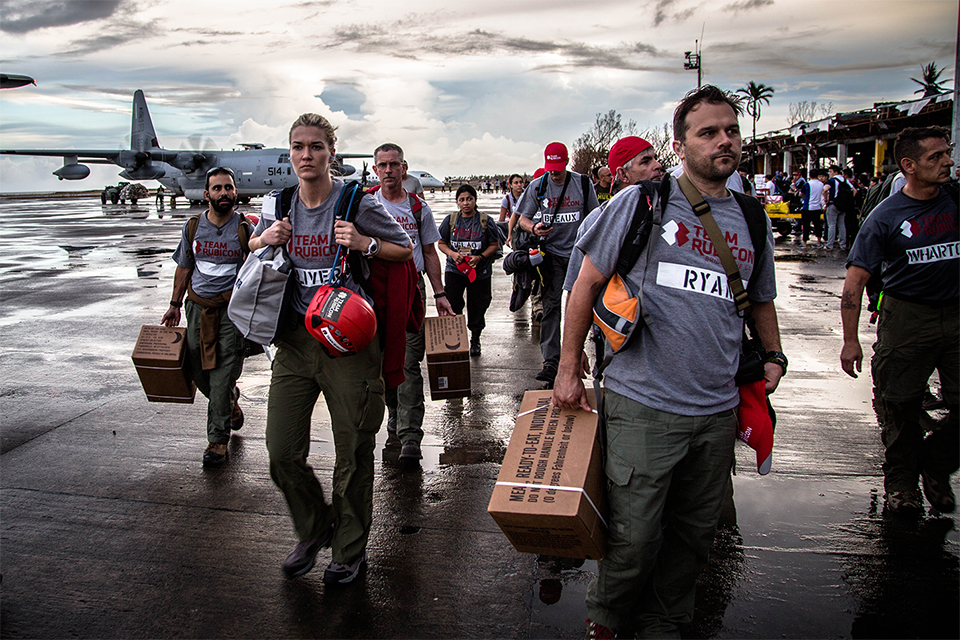 The knowledge and grit military veterans carry home with them after deployment can be a double-edged sword. Expert at dealing with high-adrenaline situations, military vets sometimes find the adjustment to “ordinary life” difficult. For many volunteers, Team Rubicon renews the camaraderie, teamwork, discipline and sense of purpose they experienced while serving in the military. Working side by side with veterans of all ages, team members provide each other with support, compassion and continuity – while at the same time providing distressed communities with desperately needed comfort and assistance.

Team Rubicon volunteers are not only trained and equipped to respond to disasters, they also often have deep personal experience with the particular challenges of recovering from adversity. Having weathered their own harsh, traumatic, life-or-death experiences, many veterans share a profound level of understanding with the victims they are so willing and able to serve.

While Team Rubicon was founded to aid disaster victims, the organization quickly realized that the work they were doing was also aiding returned veterans. The organization’s resulting dual mission provides a lifeline to both the victims of disasters and the emergency response teams that deploy on a moment’s notice to help them.

To find out more about Team Rubicon’s unique mission, visit www.teamrubiconusa.org. To learn more about how Legistics can help your business achieve its full potential, visit our home page.