Simplicity can have surprising power. For 70 years, the humble mission at the heart of Toys for Tots has remained constant. Through decades of dramatic social, cultural and technological changes, this Marine-led non-profit organization has remained focused on one thing and one thing only: Making sure that every disadvantaged child they can possibly reach receives a toy at Christmas.

The Toys for Tots program began modestly in 1947 when a group of U.S. Marine Reservists in Los Angeles, moved by the prospect of impoverished children waking up on Christmas morning to dashed hopes and dire circumstances, decided to take action. The Marines in their Dress Blues became a common sight in the community as they mobilized to collect more than 5,000 toys from local donors and distribute them to starry-eyed children on Christmas Eve.

From that first spontaneous and heartfelt effort, a beloved holiday tradition was born. By the following Christmas in 1948, the U.S. Marine Corps Reserve Toys for Tots program had expanded nationwide. The organization’s simple, hopeful mission had struck a chord in post-war America. From coal miners to movie stars, the public enthusiastically jumped on board.

As a sign of how quickly Toys for Tots captured the public imagination, Walt Disney himself designed the first poster for the group’s 1948 national campaign, a cheerful red toy train that remains the Toys for Tots logo to this day. In the ensuing years, major celebrities and public figures (from John Wayne and Frank Sinatra, to Barbara Bush and Michelle Obama) served as official spokespersons for the organization. And as the organization’s visibility continued to grow, so did its reach.

From serving a single community in 1947, Toys for Tots has expanded to over 700 communities in 50 states, the District of Columbia, Puerto Rico, the Virgin Islands and Guam. The organization has given away close to half a billion toys to hundreds of millions of children. That’s a lot of promises kept and hopes fulfilled. A lot of smiling faces on Christmas morning. 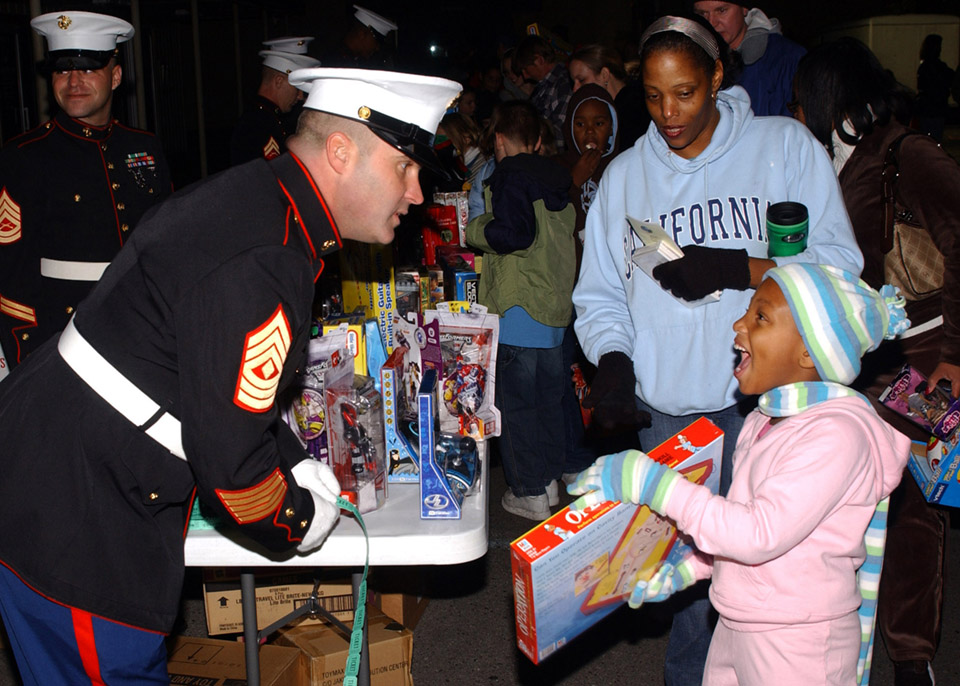 A profound message of caring

A toy is, of course, a very tangible thing. But Toys for Tots also benefits children and communities in intangible and sometimes inexpressible ways.

It would be difficult to put a value on the feeling a neglected child gets when she discovers that someone cares enough to give her a gift at Christmastime. Or the sense of pride a young Marine feels when he gives back to the community he grew up in, in the process inspiring the next generation of young people struggling with poverty to believe that they too can rise and succeed. Or the connection to the true spirit of Christmas that a donor feels when selflessly offering hope and joy to an unknown child during the season of giving.

Though intangible, these are the lasting gifts that Toys for Tots gives to disadvantaged children, to struggling families, and to those whose kindness lifts them up.

Toys for Tots is the only non-profit community outreach effort within the Department of Defense with a mandate to reach outside the military to support children and communities across the country. The enormous success of the initiative – and the exponential increase in its size – led to the formation of a non-profit support organization tasked with handling the fundraising and administrative needs of the program.

The Marine Toys for Tots Foundation raises funds year-round to supplement the Marine Reserve toy drives that take place from October to December. They purchase additional toys for children of all ages, maintain relationships with the business community and provide logistical support for the yearly Toys for Tots campaigns. With their professional support, Toys for Tots has been able to extend its reach and continue to honor its founding mission without missing a beat.

From the first handcrafted doll gently handed to a little girl by a Marine in a Dress Blue uniform in 1947, to the many millions of gifts lighting up the smiles of children in every corner of the United States today, Toys for Tots has kept the underlying principle simple. Bring joy and hope to children. Show vulnerable kids that someone cares. Celebrate the true and enduring spirit of Christmas.

To find out how you can participate in the Christmas miracle taking shape in towns and cities across America., visit toysfortots.org for donor and volunteer information. To find out more about how Legistics can help your organization thrive this holiday season and beyond, visit our home page.